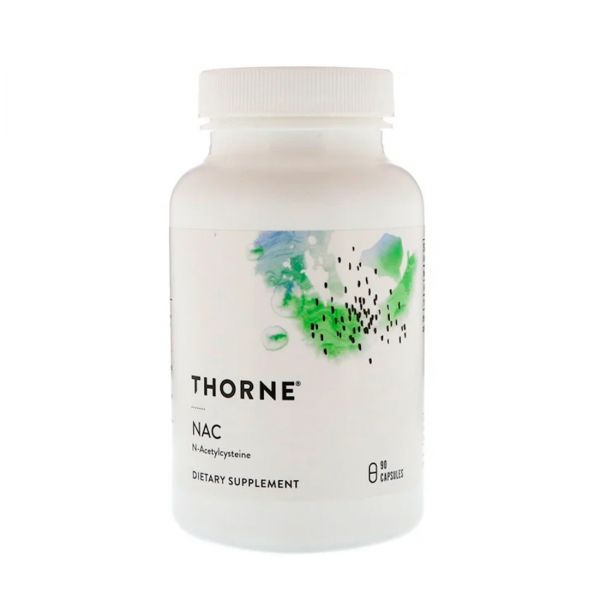 Skip to the beginning of the images gallery
-10%

SKU
THR-60029
UPC:
693749560029
Weight:
0.20lbs
Dimensions (Inch):
2.3 x 2.3 x 4.3
Brand:
Thorne Research
You save 10%
was $28.00 Add to Cart to See Price
In stock
A potent antioxidant that supports liver detoxification and thins the mucus for improved respiration. Benefits of NAC include promotion of immune function, supports liver and kidney detoxification, protects the liver and kidneys from toxic insults, and acts as a potent antioxidant. Gluten, dairy, and soy free.

Earning 252 points for this item
Applies only to registered customers, may vary when logged in.
Details

A potent antioxidant that supports liver detoxification and thins the mucus for improved respiration.

NAC (N-Acetylcysteine) is a potent amino acid that increases glutathione levels (for liver detoxification). In addition to supporting respiratory health, it also has kidney-protective effects.

N-acetylcysteine (NAC), a sulfur-containing amino acid, is the precursor to the amino acid L-cysteine, one of the three amino acids that comprise glutathione. Animal and human studies of NAC have concluded it has potent antioxidant activity. In addition to its antioxidant activity, NAC is effective in promoting normal liver detoxification and protecting the liver and the kidneys from toxic insults. As a sulfur source, NAC stimulates the synthesis and activity of glutathione, an important antioxidant in its own right. Research suggests NAC is capable of enhancing immune function. NAC also helps maintain good pulmonary health due to its mucolytic activity.

The sulfur in NAC is able to cleave the bonds in mucoproteins, which results in mucus being broken into smaller, less viscous pieces. Hence, NAC's ability to decrease the viscoelasticity of nasal mucus and increase the clearance of mucus by the cilia by thinning secretions helps maintain good pulmonary health.

Cysteine is a semi-essential amino acid. Your body can product it from other amino acids, specifically methionine and serine. It is found in most food high in protein, such as eggs, chicken, turkey, yogurt, legumes among others.

Consuming adequate cysteine and NAC can be beneficial for a variety of health reasons. It helps replenish glutathione, the most powerful antioxidant in your body. These amino acids also help with chronic respiratory conditions.

NAC is needed to make and replenish glutathione. Glutathione helps neutralize free radicals that can damage cells and tissues in your body and it's essential for immune health.

NAC plays an important role in your body's detoxification process and can prevent kidney and liver damage. It may also improve psychiatric disorders and addictive behavior by regulating glutamate levels which is the most important neurotransmitter in your brain.

Tamper Evident: Use only if bottle is sealed. If pregnant, consult your health care practitioner before using this product. Store tightly sealed in a cool, dry place.