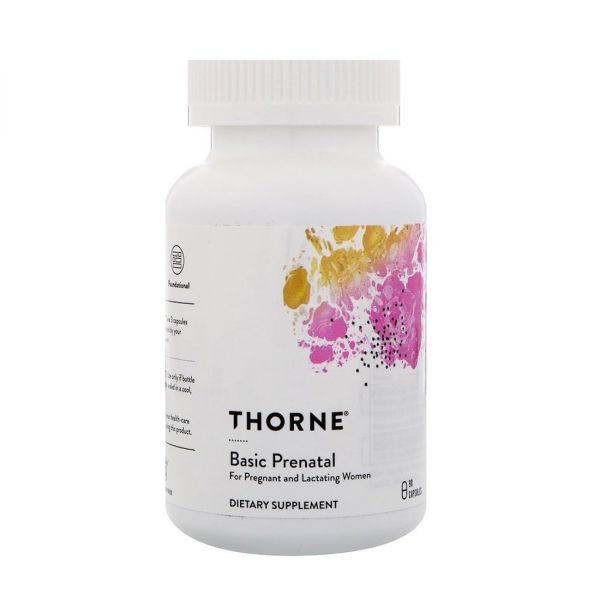 Skip to the beginning of the images gallery
-10%

Earning 270 points for this item
Applies only to registered customers, may vary when logged in.
Details

Basic Prenatal is designed to be gentle and effective for women who are trying to conceive, pregnant, or lactating. It contains none of the additives found in mainstream prenatal supplements.

Supplementing with a multi-vitamin/mineral formula before, during, and after pregnancy and while breastfeeding can help produce a healthy baby and benefit the mother. For instance, supplementation with folic acid reduces the risk of having a child with a brain or spinal cord birth defect. Thorne's Basic Prenatal provides the active forms of folate (5-MTHF) and vitamin B12 (methylcobalamin) for optimal tissue-ready use. Basic Prenatal also contains well-absorbed iron bisglycinate, which meets a pregnant woman's increased need for iron while being easy on the stomach and non-constipating. Several of Basic Prenatal's ingredients (including vitamin C, vitamin B6, and vitamin K) have been demonstrated to benefit "morning sickness." Basic Prenatal is manufactured with the purest possible ingredients and without the additives and coatings usually found in mainstream prenatal supplements.

Pregnancy is a critical time for optimizing a woman's health and nutrition, important for both for the mother and her baby. Overall nutritional and caloric needs are greatly increased by pregnancy and breastfeeding.

The Centers for Disease Control and Prevention recommend folic acid supplementation for all women of childbearing age because the biggest need is during the first trimester, when a woman may not even be aware she is pregnant. A woman who consumes a healthful diet that provides adequate folate can reduce her risk of having a child with a birth defect of the brain or spinal cord. A high-potency multi-vitamin/mineral supplement can sometimes be difficult for a woman to "stomach," particularly during the first trimester of her pregnancy. Therefore, Thorne does not include large amounts of the nutrients commonly known to cause stomach upset. Instead, smaller amounts of these nutrients are included, but in their most tissue-ready and absorbable forms for optimal utilization. Among these are the active forms of several of the B vitamins – pyridoxal 5'-phosphate (vitamin B6), riboflavin 5'-phosphate (vitamin B2), L-5-MTHF (active form of folate), and methylcobalamin (vitamin B12). Because calcium in a large amount can also cause stomach upset, a moderate amount in the highly absorbable citrate and malate forms is used. Additional calcium and magnesium can be supplemented as indicated.

Take 3 capsules daily or as recommended by your health-care practitioner.

Accidental overdose of iron-containing products is a leading cause of fatal poisoning in children under six. Keep this product out of reach of children. In case of accidental overdose, call a doctor or a poison control center immediately.

Tamper Evident: Use only if bottle is sealed. Store tightly sealed in a cool dry place.