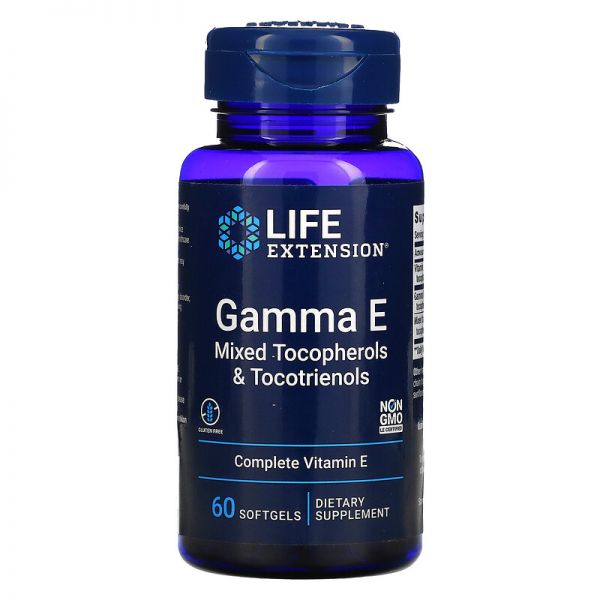 Skip to the beginning of the images gallery
-20%

Vitamin E is a family of eight related, lipid-soluble, antioxidant compounds widely present in plants. The tocopherol and tocotrienol subfamilies are each composed of alpha, beta, gamma and delta fractions that have different biological activity.

Vitamin E compounds are some of the most researched and most important nutrients to include in your daily regimen.

Alpha and Gamma-Tocopherol: Better Together

Studies have shown that the gamma-tocopherol form of vitamin E is especially important for those seeking optimal health benefits. But the combination of alpha- and gamma-tocopherol supplementation appears to be superior to either tocopherol alone on biomarkers of oxidative stress and other whole-body health factors.

Evidence suggests that gamma tocopherol is one of the most critically important forms of vitamin E for those seeking optimal health benefits. But studies show the combination of alpha- and gamma-tocopherol supplementation appears to be superior to either tocopherol alone on biomarkers of oxidative stress and other whole-body health factors.

Most commercial vitamin E supplements contain little, if any, gamma tocopherol. They instead rely on alpha tocopherol as the primary ingredient. However, it’s the gamma tocopherol (not the alpha form) that quenches peroxynitrite, the free radical that plays a major role in the development of age-related decline.

Tocotrienols have shown superior action in maintaining arterial health. In 2010, a team of Asian scientists demonstrated that this class of nutrients, which are difficult to obtain in sufficient quantities through dietary sources alone, may provide superior support in maintaining triglyceride levels already within a healthy range in aging individuals.

Read the entire label and follow the directions carefully prior to use.

Take one (1) softgel once or twice daily with food, or as recommended by a healthcare practioner.

If you are taking anticoagulant or antiplatelet medications, or have a bleeding disorder, consult your healthcare provider before taking this product.